The idea standing behind the Rutchay system emerged because of the need of safe drinking water for soldiers. Technological progress allowed to resign from the previous distinction between short-term and long-term drinking water. The Rutchay system gives the troops access to drinking water of the highest purity class, regardless of the place of water acquisition. It is a modern water treatment plant reduced to backpack-size. The system can be used to treat water from various sources, i.e. wells, rivers, lakes, groundwater. It improves the taste and aroma. The system prevents bacteriological, chemical and radioactive contamination, guaranteeing the highest drinking water quality.

THE RANGE OF POTENTIALLY DANGEROUS SUBSTANCES ELIMINATED FROM DRINKING WATER:

All processes are automated, the device works on flow-basis. The Rutchay Water Treatment System is a class of devices, applied where there are no basic data or the quality of water is variable and when every drop of water is vital.

USAGE.
The Rutchay Water Treatment Plant is ready for immediate use. Persons authorized to operate the plant need to be trained in using it. Technical abilities required to operate Rutchay are the same as the ones needed to turn on light. Rutchay is completely equipped.

ENHANCED EFECTIVITY RANGE:
It is possible to enhance the system’s efectivity range for special applications. If special requirements are essential, the user needs to specify contaminants which should be eliminated from the treated water.

We are intentionally able to design any mobile device in terms of shape and capacity of treatment.

Cascade was created in order to meet the contemporary requirements of water treatment and purification of liquids, for military and civilian applications. Vast knowledge and rich experience of its designers, as well as the technology involved, allowed to create a unique solution, characterized by an extraordinary flexibility in configuration, depending on the task. It is this feature of Cascade  which allows to offer diverse water treatment systems, depending on the needs of the Customer. Cascade purifies unclassified surface water (the lowest category of surface water) up to the level of drinking water specified by the regulations of the Ministry of Health.

Main features:
Mobility
Dimensions - height: 115 cm, width: 60 cm, length: 130 cm, weight: around 300 kg. Thanks to its size it can work everywhere without necessity of infrastructure rebuilding.

HIGH EFFICIENCY – The CASCADE keeps capacity from 450 to 900 dm3/h. In the period of 20 h protects a daily water demand of number ca 4000 people. It is to underscore, that during the process a quantity of created sewages is exceptionally low.

INSTALLATION & EXPLOITATION COSTS – The CASCADE is the cheapest device on all markets, if compared with exploitation and adaptation costs. Technologies of selective liquid purification offered by TARGET TECH. , and applied in the CASCADE device, base on the ground of application of Ion Exchange resins. Applied resins are of the highest quality, what ensures the final effect. 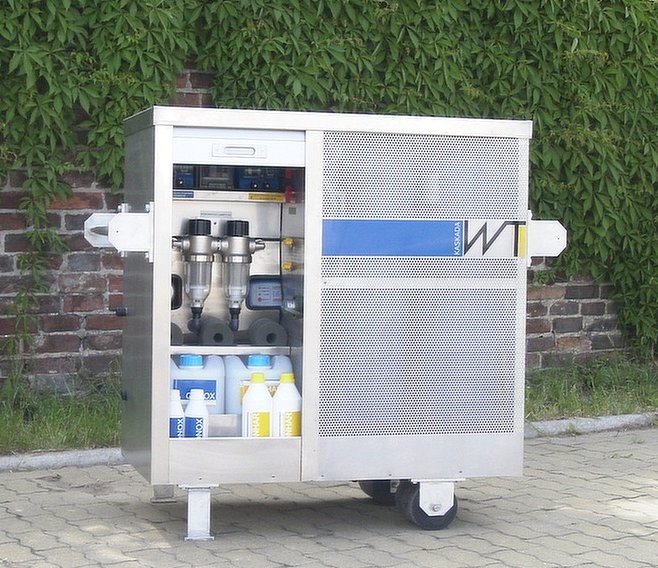 Water treatment process is based on particular components of the system: